Ways to Validate Your App Idea: Prototype, PoC, or MVP?

Before starting to implement an idea, different people have different definitions of the intended result. In this case, you can consider the MVP (minimum viable product), POC (proof-of-concept), and Prototype which are the most common ways to validate your app idea.

Let’s try to determine when it is most appropriate to use each of the above definitions to avoid misunderstandings.

A minimum viable product is often developed as a first version and considered to be the most common way to validate the app idea. This is a prototype that has basic functions and gives an idea of how the final version works. It could be a website or an app – but whatever you do, keep it simple for now.

The term “Minimum Viable Product” became popular a few years ago with the advent of the Lean Startup era. The essence of the method is to reduce the costs of building a business. Therefore, MVP is a product with minimal start-up costs. Of course, building an MVP within the Lean Startup approach isn’t the only product development approach but the most spread one.

Since MVP is a prototype, it’s not a reason to make it worse. To create an MVP, you need to think over all the future product elements – each capability, each potential page – and choose what will illustrate its functionality and benefits best for the audience.

Due to several factors (market, alternative solutions to the problem, etc.), your MVP will be significantly different from anyone else’s. So ask yourself the question: “What minimum functionality is enough to solve the problem” Thinking this way, you will spend much less time on secondary tasks and save resources in the early stages.

Apple is one of the most valuable brands in the world today. But after founding in 1976, the company only offered a printed circuit board. There was no keyboard, no monitor, no case. 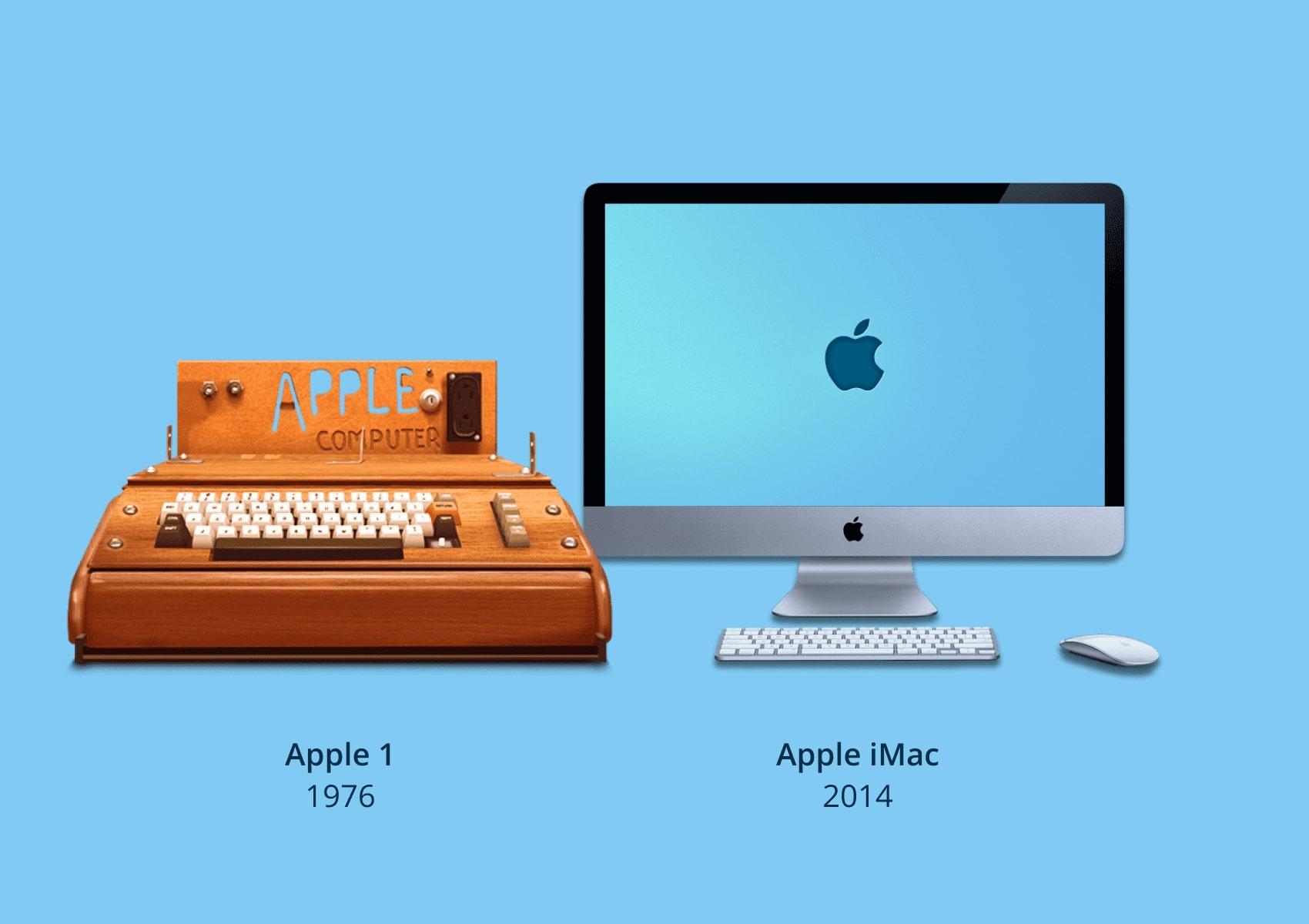 eBay, the most popular online auction site, was initially called AuctionWeb and launched in 1995. Below is the first draft of the eBay homepage – and the 2014 version. 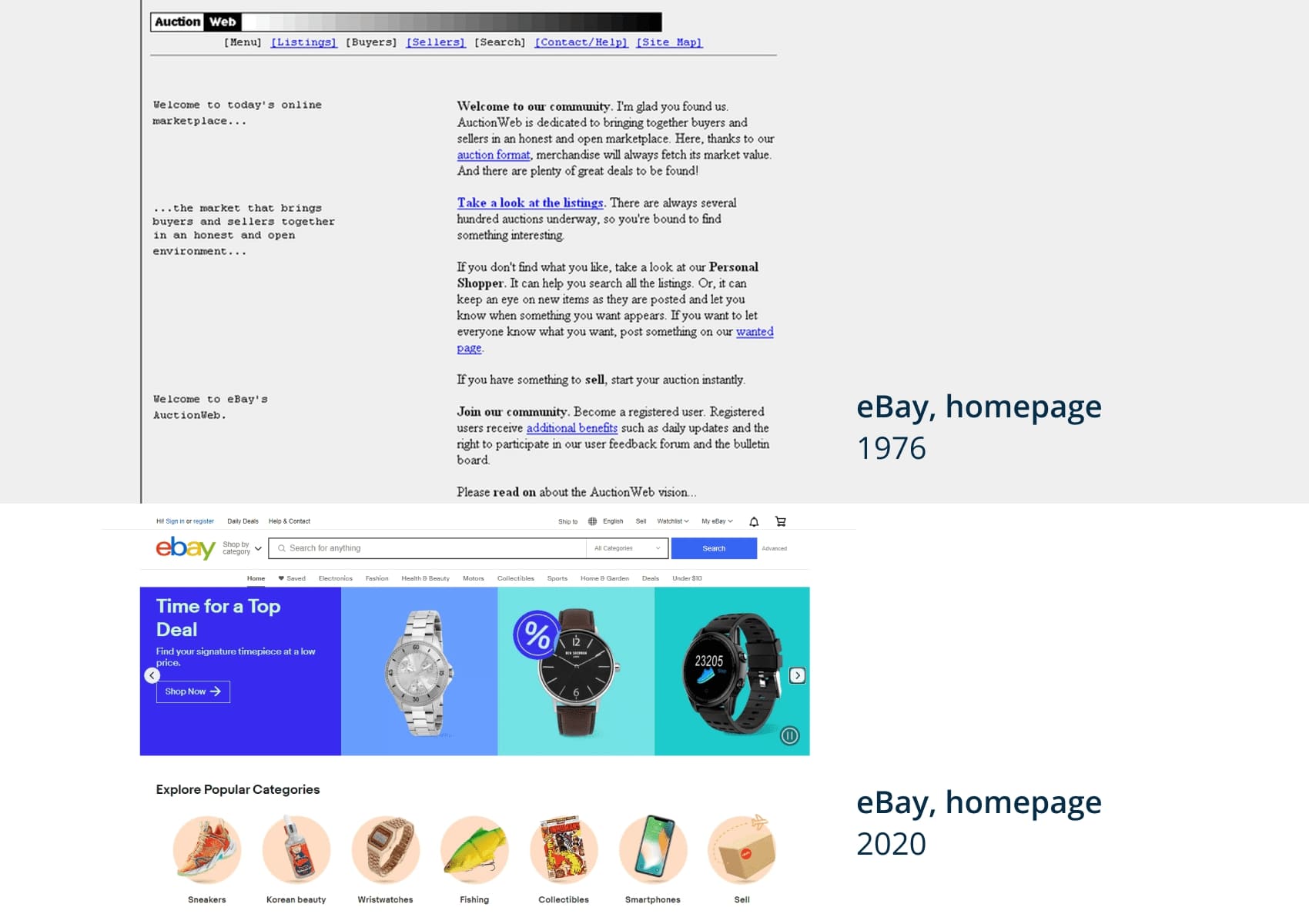 We see how successful these products are today, but we forget that it took them years to reach their current level.

Balancing product priorities doesn’t end with the MVP launch. It continues throughout the entire product lifecycle. Even when you have a customer base and a profitable company, you still have to choose what to do first and leave for later.

The minimum viable product is not a “raw” version, but a “skeleton” of a future solution, containing the most important of what will be in it.

There are different approaches to defining the Proof of Concept. It often includes prototyping and creating an MVP. However, these are different ways to validate the app of idea, as they pursue different goals and yield different results. It is also mistaken to take PoC as a kind of “draft” of the project, which only needs to be slightly modified in the future.

The Proof of Concept format itself is much closer to research than developing a working product. Only a small part of the system is tested – critical functions, and the result obtained may not be used in further development. Since the goal of PoC is to make sure the concept works in a short time, minor aspects important for the final version of the product can be omitted. In such cases, having received the green light during the PoC phase, the team can start developing a project from scratch.

Considering that product development based on new technologies can be too risky or hassle, PoC is becoming an indispensable tool to save you time, resources, and money.

PoC proves the viability of the product. It demonstrates that the project can be completed and provides a starting point for developing the project as a whole.

PoC also identifies several potential pitfalls and weaknesses that should be avoided during product development. Based on this research, a more accurate estimate of the project is created, which allows you to move on to the next stage of development.

At the same time, Proof of Concept does not cover the entire system but is aimed at a specific part of it, which users may not see since PoC is mainly used internally to flesh out the product development path.

At first glance, it might seem that Proof of Concept can be used on any complex project. But this is only at first glance.

A distinctive feature of PoC is that it deals with unusual, previously unheard of situations. Accordingly, when the need for PoC arises, the solution “at the exit” is different each time.

Whatever the reason for your doubts, PoC will help clear them up. Either it becomes clear that your project is viable and relevant to the market, or it’s time to look for Plan B.

And last but not least, – Prototype. A prototype is a working model of software with some limited functionality. The prototype does not always contain the exact logic used in the real software application and requires additional evaluation effort.

Prototyping is used to enable users to evaluate developer suggestions and test them before implementation. It also helps to understand the user’s specific requirements that the developer may not consider when developing the product.

One of the most critical aspects of the product creation process is collecting feedback. You can gather feedback at every development stage with prototypes, whether adding new features or changing elements. Check what works for your audience and what doesn’t. Feedback will be vital to the success of your project.

Prototyping provides a clear visualization of the design to understand how the final product will look like. It helps the team understand what they are designing and for whom they are doing it.

Try to stay in “prototyping mode” as long as possible. The more you learn about the design problem you are trying to solve, the faster the implementation will be. You can always make changes to the preliminary model. Making early changes will help you reach your goals faster. Prototyping will also make your development process more cost-effective as the entire development cycle becomes shorter.

Do not be distracted by unnecessary things

There are many details and distractions in development that can get to design user interactions with the product. Therefore, creating a prototype allows you to create a technically correct and functional product.

Checking before design and development

Prototyping allows for several discussions between iterations before proceeding with final development. This iterative process will enable you to be sure that you are doing exactly what you need.

It’s important to understand that while MVP, POC, and Prototype have many similarities, they still have different goals. In the course of work, the POC can grow into a prototype or MVP, or vice versa. In the end, it’s up to you to decide which way to go.

If you doubt which way to choose to validate your app idea, you’re welcome to contact us for a free consultation! 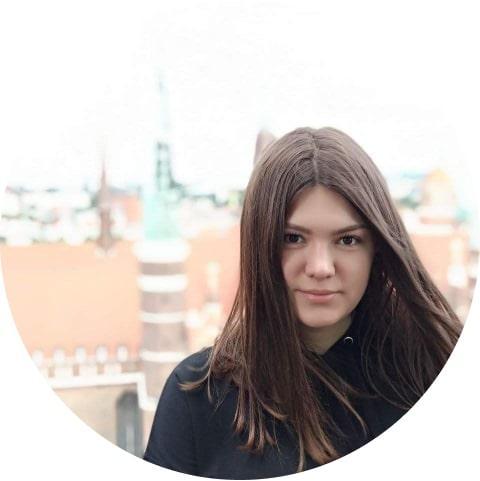 If you are reading this, you might have an idea to start your own startup or develop a new product. May be now you are searching for a company that will help you, or trying to do this on your own.

Sometimes there is a little confusion when it comes to defining websites and web applications. A lot of people think they are the same, some others say that there is a critical difference between them. Spoiler: there are some differences.

Scrum is probably the most wide-spread Agile framework today. It is considered an upgrade compared to traditional product development practices and is recognized by professionals from various industries all over the globe.