Why It’s Time to Migrate from Monoliths to Microservices

As applications become more complex, developers and engineers are looking for ways to build flexible and scalable software solutions. In that vein, 60% of tech companies, including giants like Spotify and Amazon, have switched to microservices.

In line with this trend, any forward-thinking tech company should consider switching from a monolithic architecture to microservices.

But before you start the migration process, you must develop a clear, feasible strategy to ensure a smooth transition. In this article, you’ll learn the benefits and challenges of migrating to microservices.

A brief overview of monoliths and microservices

A monolithic architecture is a system in which all operations, data storage, and request processing are handled by a universal codebase.

Although monolith ecosystems exist mainly in legacy applications, some developers still use this architecture model for simple software programs and proof of concept applications. 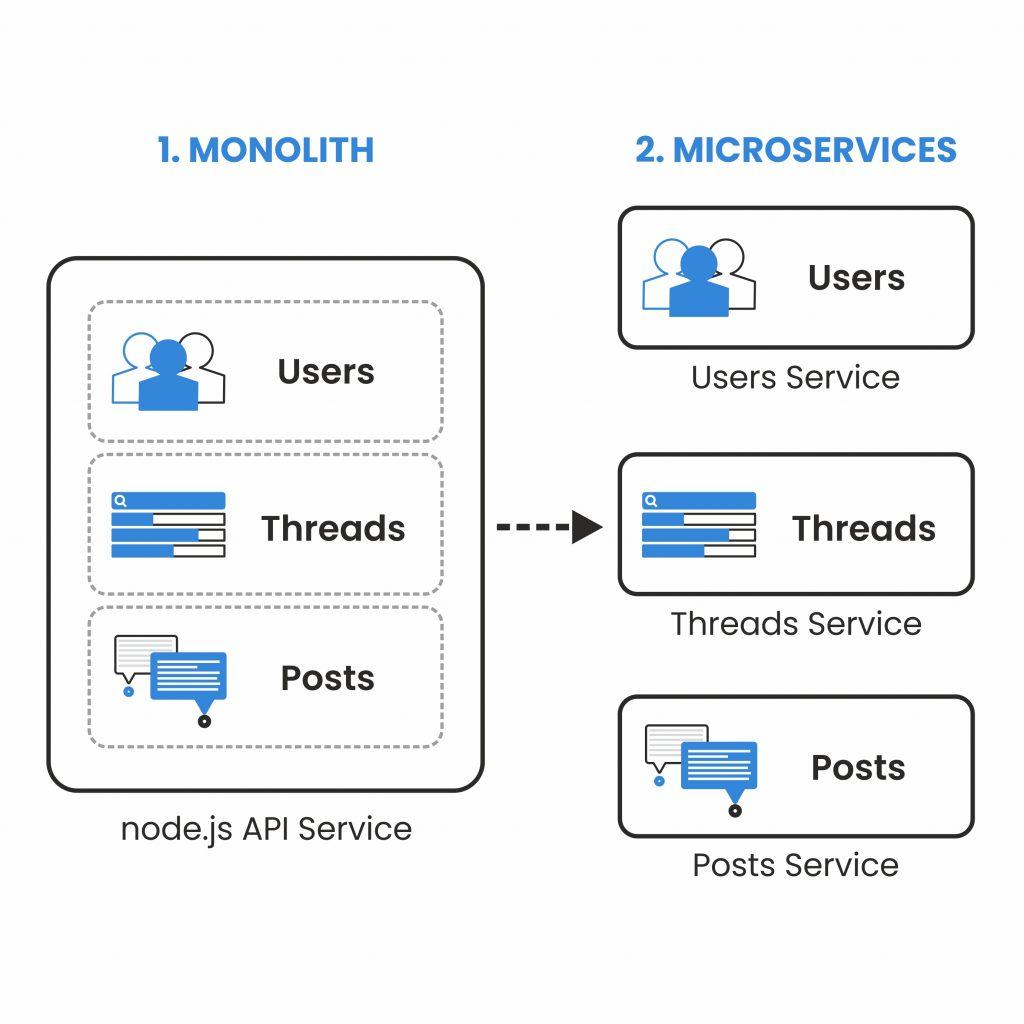 The following are core attributes of a microservices architecture:

Reasons to migrate to microservices

If your business is on the fence about migrating to microservices, your hesitation is understandable. Let’s discuss some compelling reasons why transitioning to an SOA makes sense.

Monoliths are difficult to scale because changes to one module necessitate a wholesale redeployment of the entire application. But with microservices, teams can make the system more scalable without disrupting other functionalities.

Netflix switched from a monolith architecture to an SOA to make their system more scalable. As the company’s user pool continued to expand, the developers predicted that the development ecosystem in place would no longer be able to handle the influx of data and content.

The rigidity and lack of agility in monoliths makes it difficult to adapt to modern platforms and technologies. Conversely, microservices give engineers more wiggle room to experiment with and integrate new technologies.

EBay adopted RESTful APIs as part of the company’s efforts to abandon its outdated monolithic architecture. By doing so, the company was able to deploy a component library that powered functionalities like Dark Mode.

When working with monoliths, engineers can only work within the confines of the core architecture. But with microservices, multiple teams can simultaneously work on the same application. Consequently, this ensures the efficient use of time and resources, increasing productivity across the board.

Although monoliths are easier to build, they only work for simple applications, proof of concept software (PoC), and minimum viable products (MVPs).

When working on complex applications like ride-sharing apps, monoliths can disrupt the timeline by limiting the range of freedom that engineers can enjoy.

Alternatively, using an SOA adds extra degrees of freedom, increases the efficiency of processes, and therefore reduces the time-to-market.

Bugs in a monolithic architecture make the entire system vulnerable to malfunctions and possible malware attacks (DDOS, SQL injections, etc.). But these vulnerabilities are less critical when using microservices.

Although the multiple modules of an SOA introduce several points of attack, the failure of one unit doesn’t spell doom for the entire ecosystem.

Debugging a complex monolith is a grueling task for developers, especially when working with an old codebase. Even if the team can pinpoint the malfunction easily, they still need to redeploy the entire infrastructure.

However, you can reduce the effort spent on redeployment by moving to microservices. You only need to fix and redeploy the affected modules instead of the entire application architecture.

One drawback to using an SOA is that you might struggle to discover the exact point of failure in complex, multi-layered systems. But with modern monitoring tools like Netsparker, you can track these flaws in no time.

Fosters communication and growth in teams

When an application relies on monoliths, every team has to focus on a specific aspect of the architecture, which leads to redundancies, bureaucratic bottlenecks, and extended timeframes.

On the flip side, microservices rely on APIs to communicate. To meet this goal, teams need to generate functions that work both internally and externally.

When Amazon moved from monoliths to microservices, the company created its own web service APIs to communicate with the rest of the world.

The big guns are doing it

Yes, hopping on the bandwagon is not always the best business approach to software development. But, as we’ve mentioned, drivers of innovation like Amazon are championing microservices. This buy-in from tech giants makes the idea of adopting a service-oriented architecture appealing.

But before switching from monoliths to microservices, weigh the pros and cons of each model on a case-by-case basis.

Challenges of migrating from monolithic to microservices

Data from O’Reilly shows that around 62% of companies have recorded some level of success after migrating to microservices.

However, companies like Shopify still maintain a modular version of their monolithic architecture because it helps them maximize productivity. And switching to an SOA presents a few hurdles that every team must consider before migrating.

Here are the main challenges to moving your application from monoliths to microservices.

Adding more modules to the existing architecture makes it more complicated to manage. Instead of focusing on a single codebase, you now have to worry about multiple codebases performing different operations. And not only that, the documentation will continue to increase as new modules or microservices enter the system.

With microservices, you now have to worry about debugging the code for multiple distributed servers instead of focusing on just one. This obstacle prolongs code review efforts and delays the implementation of new changes before deployment.

When you add new modules, you need to find developers and engineers who can work with the underlying programming language. Your DevOps team will need to upgrade their skill sets or hire new team members to fill the skill gap.

Increases the cost of development

Since you now need to add more services, expand testing efforts, and improve skill sets, the overall cost of migration will increase. In some cases, like Spotify showed, sticking with the monolith and making necessary upgrades is the more cost-effective option.

The best strategy for migrating monoliths to microservices

Migrating to microservices is not a foolproof approach by any means. Mistakes and lack of preparation can destroy the application, leading to abandoned projects and wasted resources.

So, we’ve gathered the best practices to ensure a smooth migration to microservices.

The most common mistake most companies make is that they dive into the migration effort before putting the right team in place.

Unlike the traditional monolithic architecture, working with microservices requires the efforts of cross-functional teams comprising developers, QA specialists, and engineers.

Consider creating a refined DevOps strategy to build, test, and deploy applications when migrating to microservices. And if your team members lack the skill to carry out the migration procedure, this is the perfect time to upskill them.

With a team in place, your engineers can start deconstructing the monolithic architecture, paying particular attention to continuous delivery pipelines and the API management system.

Also, your team should prioritize components that can be decoupled without affecting client-facing applications that rely on the monolith to run. Tools like Sonargraph Explorer can help you outline component dependencies based on an established hierarchy.

During migration, you should never decouple all components at once. The best strategy involves decoupling edge services before advancing to those embedded deeply into the existing monolith.

Starting with edge cases allows your team to “fail early” and flesh out all operational prerequisites before moving to mission-critical components.

Use APIs for your remote user interface

During migration, users will still interact with your application. To ensure that they can access the software, use an API to handle all data-access cases. Also, the unified API should be backward compatible.

According to Eric Evan’s domain-driven design (DDD), the API should provide an anti-corruption layer to translate requests between the subsystems that make up the monolith and microservices applications.

Migrate a monolith to macroservices, then to microservices

Splitting a monolithic architecture into too many microservices creates an ultra-complex distributed system that will be a nightmare to debug.

To avoid this unnecessary heavy lifting, start by breaking the monolith into large chunks (macroservices) that share the same data repositories, then split them into smaller independent units (microservices).

For instance, if you have a monolith for a food ordering application, a macroservice can handle “Orders,” while the constituent microservices can manage sub-tasks like sorting, payment, and shipping.

You can use the Richardson Maturity model to decouple services based on REST.

At every stage, always carry out tests to debug the application and spot logic flaws within the architecture. Use integration testing techniques to establish a relationship between the migrated data and the remaining chunks in the monolith.

You can also test access controls to ensure that users are not viewing data from the old database. Afterward, you can deploy the freshly-minted microservices.

An excellent approach to deploying microservices is the evolutionary architecture model. Under this approach, your team can introduce incremental developments in core engineering practices. This evolutionary model is apt for the constantly-changing ecosystem of software development.

Ultimately, always test every new component and feature in the new microservice architecture before deployment.

The Advantages of Microservices vs Monolithic Architectures

The debate about monolithic and microservices architectures has gained steam recently, with companies like Amazon and Google switching to microservices.

Container Orchestration: What Is Kubernetes

With the boom of horizontal scalability and microservice architecture, the world observed the “container deployment era”. Containers have been in use for more than ten years. Today at least a quarter of leading IT companies use container solutions in a big production, and this number is likely to grow further.

Efficient software is vital to daily business operations. Legacy applications, on the other hand, are systems that run on outdated technologies and slow down or even block processes within organizations.